Something to Sneeze At!

NSVH frequently receives calls from concerned owners, worried that their dog is making a strange “choking noise” that lasts for a few seconds and sounds like they may be gasping for air. They dog is often described as having “honking” spells or sounding as if they need to bring something up. What on earth could be causing these alarming sounds?

Some dogs have a condition known as paroxysmal respiration or, as it is more commonly called, reverse sneezing. With this condition, the dog rapidly pulls air into the nose, whereas in a regular sneeze, the air is rapidly pushed out through the nose. This seems to be a uniquely canine condition, as we do not identify reverse sneezing in cats, or in humans!

**We should mention that all respiratory symptoms should be evaluated by your veterinarian, before assuming a reverse sneeze is the problem. While reverse sneezing is common and benign, many other respiratory diseases can be quite serious.** 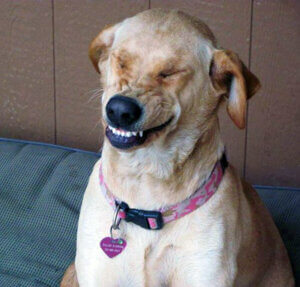 Why would my pup develop reverse sneezing? Any irritation to the nose, sinuses, or back of the throat can trigger an episode of reverse sneezing. Irritants can include allergens, secretions, foreign bodies such as seeds, pollens, or grasses, smoke, odors, masses or an elongated soft palate. For some pups, no physical cause can be established, but excitement may trigger reverse sneezing. If this is a new problem, or a recurrent issue for your pup, an examination by your veterinarian is in order to rule out an underlying medical condition, and also to ensure your dog does not have another more concerning respiratory condition such as an airway infection, laryngeal paralysis or a collapsing trachea.

What can I do to stop it?  Slightly massaging the throat may calm your pup during a reverse sneezing episode. Lightly blowing in his/her face may also help. This may cause your pup to swallow a couple of times, which will usually stop the spasm of the reverse sneeze. Offering a distraction such as a high value treat or toy may also help distract your dog enough to interrupt the sneeze.

Grain Free is Not the Way to Be!
Fun Furry Facts!